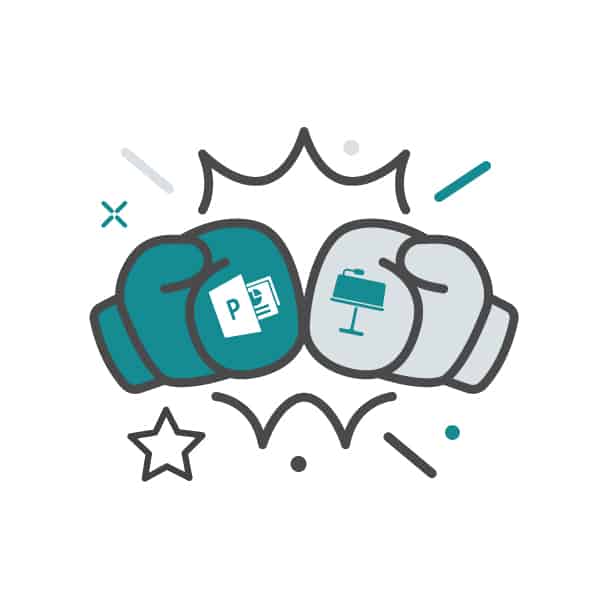 Welcome to the main event! Tonight we have a battle of wills. This is a bout decades in the making, fought in agencies and marketing departments around the world. Two worthy opponents, battling it out for screen space in corporate boardrooms everywhere. Tonight’s match will decide which package gets the honor of displaying the championship belt transition effect and which will have to settle for a basic clock wipe.

Two presentation programs enter the ring. Only one will reign victorious. Let’s meet our contenders!

In this corner, the reigning champion by virtue of age and pedigree. It’s a 32-year-old pioneer in the field, respected and used by many, but often begrudgingly. Could it be showing its age? It’s the presentation dynamo you love to hate…it’s PowerPoint!

And in this corner, the newcomer, a fresh-faced 16-year-old, with big ideas and the clip art fists to back them up. Does it have what it takes to upset its entrenched competition or is it another instance of “too little, too late” that’s plagued its owners for years? It’s the tool that you’re pretty sure SOMEONE must use, but certainly not you…it’s Keynote!

Round One: Platform Compatibility

And there’s the first round bell! Keynote, wary of its weakness in this category starts this round on the defensive. PowerPoint knows it likely has an edge here, so it steps from its corner, confident and ferocious.

Sure enough, Keynote’s position withers in the face of PowerPoint’s platform dominance. Keynote, as an Apple product, is only available on Apple devices. PowerPoint successfully lands left and right hooks with Mac and Windows versions of the software, as well as iOS, Android and Windows phones.

This means any PowerPoint presentation can be worked on and viewed on any computer, Mac or PC. Keynote can save out PowerPoint files, and import them, but not all features are supported, which means your feature set is limited if you need Windows compatibility. To be sure their presentation will look right, Keynote users will always have to make sure they have a Mac available when giving their presentations.

This also limits Keynote users’ ability to reliably forward presentations on to clients to view on their own, as the lion’s share will have PC’s. PowerPoint presses its advantage, and Keynote crumples from a series of powerful body blows.

PowerPoint dominates this round. You can work on Windows or Mac. You can view on Windows and Mac. PowerPoint lands a crushing shot to the slide template, knocking Keynote to the floor. At the end of round one PowerPoint stands laughing over a hobbled and wounded Keynote as it pulls itself up to retreat to its corner.

Round Two: Ease of Use

So far it’s not looking good for Keynote. The bell rings, and our contenders make for the center of the ring.

Suddenly, Keynote gets a second wind. Its simple, intuitive interface makes it easy for someone that’s never built a slide before to create attractive, functional presentations. PowerPoint still suffers a bit from its legacy as the unchallenged champion, when it had no reason to innovate. Its novice usability has undoubtedly improved, but you still need to be a power user to create the sort of high-functioning, attractive presentations that Keynote renders with ease.

PowerPoint is a powerful piece of software, but its clunky, opaque implementation makes it difficult for unseasoned users to take advantage of its features, and often its full feature set bloats the process for light users.

However, most people that have been creating presentations for a while will already know how to use PowerPoint, and that ready familiarity may prevent a lot of users from jumping ship.

While PowerPoint does its best to keep up, Keynote presses its renewed vigor and rains blow down on its opponent. A stunned PowerPoint defends itself as best it can, but its confidence is beginning to show cracks.

Keynote continues to gain ground! It’s a stunning comeback after the first two rounds. Keynote lands a few good punches early on with its cross-device compatibility. You can start working on a Keynote presentation on your desktop Mac, continue on your Macbook, and then later finish on your iPhone or iPad, without missing a beat.

PowerPoint puts up a valiant defense, but it simply can’t match Keynote’s performance. With PowerPoint, you can share between computers and mobile devices, but with mobile’s smaller feature set, you can’t be sure your presentation will transfer entirely. At the end of round three Keynote has made up a lot of ground. But will it be enough?

As round four begins both fighters are injured, but feeling good. The judges are split, but two still think PowerPoint has the advantage.

PowerPoint comes out swinging with a more extensive overall feature set. Twice Keynote’s age, PowerPoint has had time to develop into a full-featured presentation tool. However, this massive feature set can be daunting for new users. But its better handling of large data sets and full integration with Excel, the most popular spreadsheet program, gives it a distinct advantage. PowerPoint connects with a potent right cross.

Keynote goes on the defensive, aware that its 3D implementation is lacking compared to PowerPoint’s. However, it rallies with its better-implemented text editing capabilities, its intuitive element alignment features, and its ability to export presentations as QuickTime movies. Keynote feints left, connecting a powerful blow to PowerPoint’s tool ribbon.

This round is close, but in the end, the judges hand it to PowerPoint.

Both fighters are bruised and bleeding with two rounds each. They stagger towards each other, but Keynote suddenly catches a headwind.

Both software packages offer a host of templates to help users create presentations quickly. In general Keynote’s templates are more attractive and feel less like classic slide presentations. Keynote’s design aesthetic is more refined. Its animations are more dynamic, and much easier to edit and customize.

PowerPoint presentations feel like…PowerPoint presentations. People have come to recognize the software’s signature style, which, from a design perspective, is a bit less polished. This has undoubtedly improved in recent years, and the package’s far broader set of design templates helps make up the difference. Keynote takes the round, but the judges disagree on just how important a category this is to most users.

Round six begins with Keynote blasting out of its corner, landing repeated blows with its price tag. Free. Keynote comes preinstalled with Mac OS.

PowerPoint collapses under the pummeling it receives. PowerPoint comes with the Office 365 software bundle which, depending on the edition you get, runs between $69.99 and $439.99 per user. You also receive Word, Excel and a few other programs, so the value is there. But free is free.

After tabulating the results, the judges hand the bout to…

Keynotes ease of use, slicker presentation style, and non-existent price tag aren’t enough to edge out PowerPoint’s ubiquity, its massive user base, and its feature set. PowerPoint slides can be made to look nearly as nice as those created in Keynote. It just takes more work and a more in-depth knowledge base.

If you require high style, don’t work a lot with large data sets, and can live with being stranded in Macland, Keynote is your choice. For everyone else, PowerPoint is the best option. It offers the best overall functionality and appeals to the broadest set of users. Keynote is niche. Think boutique agency. PowerPoint is the workhorse. Think every other corporate environment, save boutique agencies.

Thank you and good night!

For assistance building your next presentation deck, whether it requires template construction and master page setup or complete content curation with infographic development, image sourcing, and copywriting, reach out to our team and let’s talk to determine what the best creative solutions are for you.

Let's make your next Powerpoint or Keynote Presentation a knockout!

Our Founder/CEO was named ‘Jersey’s Best Marketing & Communications Professional Under 40’ by NJ Ad Club? We thought it was worth a mention.

Opt-in to receive industry news, marketing, design & communication tips, tools, and resources. We’ll also share case studies that demonstrate how we’ve helped clients elevate their brands and sell their products, services, and technologies. We promise we won’t share your address with anyone. At all. Ever.

With awards from the following organizations:

DURING THIS TIME OF CRISIS WE’VE GOT YOUR BACK. WE’RE CURRENTLY OPERATING UNDER NORMAL BUSINESS HOURS OF 9am–5pm EST.
CONTACT US AT 609-365-1910 OR BY EMAILING SUPPORT AT support@costellocreativegroup.com.